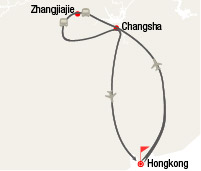 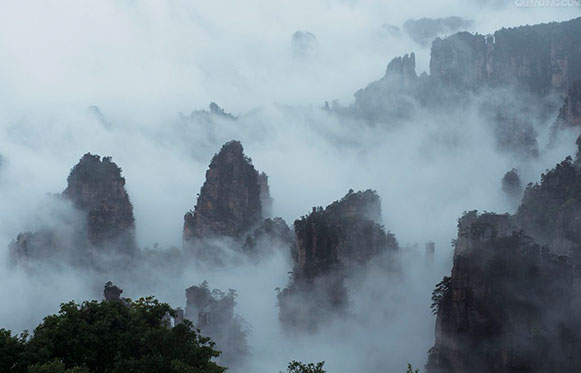 Book Now
Day 01 Arrive in Changsha
Detailed Itinerary: Your tour guide will meet you at Changsha Airport or Railway Station. You will then take a shopping trip to Huangxing Walking Street.

Day 02 Changsha to Zhangjiajie
Detailed Itinerary: After breakfast, you will be transferred to Zhangjiajie. You will then proceed to visit Yellow Dragon Cave - with its huge three-dimensional structure of space, cave-rich landscape, both land and water sightseeing line, Huanglong Cave enjoy the” Karst cave wonders of the world”. Afterwards, you will visit the commercial pedestrian street—Xibu Street.

Yellow Dragon Cave: Otherwise known as Huanglong Cave, is a karst cave located near the Wulingyuan district of Zhangjiajie City, Hunan, People's Republic of China and a national 4A rated scenic area.

Day 03 Zhangjiajie
Detailed Itinerary:
Zhangjiajie National Park is divided into 3 portions: Yuanjiajie, Yangjiajie and Tianzishan.  Till now the cable to Tianzishan is till under construction.  So we will visit Yuanjiajie Mountain and Yangjiajie Mountain.  Take Bailong lift up to Yuanjiajie.  Walk around the mountain top for 1 hour to see the No. 1 Bridge.  Then take 30 minute coach to Yangjiajie.  Hike another 1 hour to Wulong Village and Tianbofu.   Take cable car down the mountain and finish today's tour.

Zhangjiajie (Bailong Elevator):  A glass elevator built onto the side of a huge cliff.  It is 1,070 feet (330 m) high. It is claimed to carry 3 world records:  the world fastest passenger elevator, the world highest outdoor sightseeing elevator and the world maximum load elevator.

First Bridge: a 5 meter stone slab naturally wedged between two peaks. The back garden here is known as the "Natural Bonsai" and resembles the royal garden with varieties of pinnacles.

Yuanjiajie Scenic Area: Yuanjiajie is famous as the Southern Sky Pillar inspired the floating mountains in the Hollywood blockbuster Avatar.

- IMPORTANT NOTICE-
Due to the renovation of cableway in Tianzi Mountain, the following areas can not be reached till Oct 2015.

Ten-mile Gallery: Located in the Donggou Gorge, Ten-mile Gallery is a 5km scenic road with Wanxing village and Longtan village on each end. With all kinds of sceneries and attractions on it, the road offers an amazing experience of beauty.  We will take mini train ride through this picturesque area.

Day 04 Zhangjiajie to Changsha
Detailed Itinerary:
Today you will visit Tianmen Mountain by cable car.  1 hour hike through the Skywalk Path.  Climb up the Tianmen Arch.  Later today you will be transferred to Changsha by coach/train..
Tianmen Mountain: Round trip cable car transfer to the summit of the mountain.  Tianmen Mountain Cableway is claimed in tourist publications as the "longest passenger cableway of high mountains in the world", with 98 cars and a total length of 7,455 metres (24,459 ft) and ascent of 1,279 metres (4,196 ft) The highest gradient is an unusual 37 degrees.
Tianmen Arch: An 11 kilometres (6.8 mi) road with 99 bends also reaches the top of the mountain and takes visitors to Tianmen cave, a natural hole in the mountain of a height of 131.5 metres (431 ft).
Skywalk Path: Skywalk is built on the side of a cliff on Tianmen Mountain in Zhangjiajie. Skywalk is about 4,700 feet above sea level and 200 and 60 metres long.  You can walk on kilometres of paths built onto the cliff face at the top of the mountain, including sections with glass floors.
Attractions & Activities:Tianmen Mountain, Junsheng Sandstone Painting Gallery
Meals: Hotel Buffet Breakfast, Chinese Lunch

Day 05 Depart from Changsha
Detailed Itinerary: After your hotel breakfast, you will visit Tianxin Pavilion.  You will also visit Yuelu Mountain. Lastly you will visit one of the four famous embroidery institutes in China—Xiang Embroidery Research Institute. After lunch, you will be transferred to airport for your departing flight.

Yuelu Mountain: Yuelu Mountain gathers together the essence of xiang chu culture, numerous scenic spots and historical sites are in this mountain, it also a good place for local people to hiking and rest.

Q:
Is this a tour that I can join, or do I need to form my own group? I am travelling alone.
Asked by LeAnne on Nov.19, 2015 07:42
A:
Dear LeAnne. 1. This tour is open for sign up. 2. You need to tell us a prefered day or month for your tour starting day, then we check if there is an group for you to sign in. If not, we can upgrade the tour to a private service and ask you if you want to pay price difference, ask if you need to upgrade.
Answered by Yuki_Chen on Nov.19, 2015 15:50