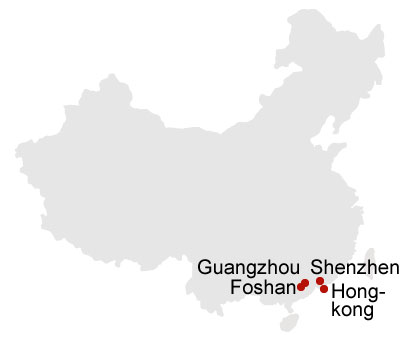 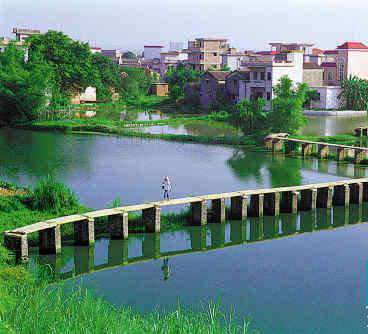 Duration: 3 Days
In this round-trip train tour from Hong Kong to Guangzhou, you will enjoy a cultural city tour in Guangzhou, visit some historical relics in Foshan and experience a bike ride along some popular attractions in Zhaoqing.
> Book Now

Book Now
Day 01 Hong Kong to Guangzhou
Detailed Itinerary:
Our English speaking tour guide will pick you up at 7:50AM.  Tour finishes at 4:30PM.  Every day, we pickup from hotels in Hong Kong Island and Kowloon. Please click the link of the hotel pickup list here.
Transfer to Depart Hong Kong for Guangzhou by 2 hours Kowloon-Canton Intercity Through Train.
Guangzhou city tour includes a visit to  the atmospheric Chen Family Ancestral Temple.  After lunch, 1 hour shopping time to see the delicate shops in old town.   Visit Qing Ping Market and Shamian Island, a relic of colonial architecture that tells the history of Guangzhou.
Chen Clan Academy: Chen Clan Academy is built at the end of Qing Dynasty and was completed in the year of 1894, which is famous for its exquisite decoration and craftsmanship.


Kowloon-Canton Intercity Through Train
An inter-city railway service between Hong Kong and Guangzhou, Foshan, Zhaoqing.  Jointly operated by the MTR Corporation of Hong Kong and the Ministry of Railways of the People's Republic of China. Services operate along the East Rail Line within Hong Kong territory, crossing the Hong Kong-Chinese border at Lo Wu, and continuing along the Guangshen Railway in Guangdong province.
Twelve trains run between Hong Kong and Guangzhou every day, with a journey time of 1 hour 40 minutes.
One train runs between Zhaoqing and Hong Kong every day.
The Kowloon-Canton Intercity Through Train started service from 5 October 1911.
Attractions & Activities:
Meals: Chinese Lunch,Dinner

Day 02 Guangzhou - Foshan - Zhaoqing
Detailed Itinerary:
In the morning, coach tour to Foshan.  You willl visit the ancient Foshan Ancestral Temple, Wong Fei-Hung Museum and Nanfeng Kiln.  Later in the afternoon you will be transferred to Zhaoqing.  Check in the hotel and free time to explore the night of Zhaoqing by yourself.
- FOSHAN -
Foshan Ancestral Temple: An ancient temple that dedicated to Confucianism, Taoist and god of Beidi. It was first built in the Song dynasty during the reign of Emperor Zhezong, in the Yuanfeng Era (1078-1085), but was ruined towards the end of the Yuan Dynasty. It was rebuilt in the 5th year of Hongwu Era of the Ming Dynasty (1372).
Wong Fei-hung Museum: Wong Fei-hung (9 July 1847 — 25 March 1924) was a Chinese martial artist, practised and taught acupuncture and other forms of traditional Chinese medicine in Po-chi-lam, his private clinic in Foshan. He is considered a folk hero and the subject of numerous films and television series.   Collections of orginal photos, films are displayed here.  A traditional Lion Dance Show is presented 3 times a day.
Ancient Nanfeng Kiln: Ancient Nanfeng Kilin is an attraction in Ancient Nanfeng Kiln Cultural and Creative Zone, located in Shiwan Town, Chancheng District, Foshan city of Guangdong province. It was built in Ming Dynasty Zhengde years (1506-1521) and is still in use now.
Foshan Pottery Museum: The best Pottery Museum in South China.  learn the development of ceramic industry in Chinese history.
-- ZHAOQING --
Qilou Building on Zhengdong Street: First built in late 19th century, like shophouses designed for both residential and commercial uses,  The ground floor portion is reserved for commercial use, mostly by small businesses like pawnshops and food vendors. The upper floors were residential use.  Some Kungfu movies were taken here in 1980's.
Guo Zheng Zong (Sticky Rice Dumplings): A variant of Zongzi shaped in a triangular pattern - Chinese food made from sticky rice, stuffed with pork  inside and wrapped in big bamboo leaves.  The best Guozhengzong is made by Feizaiwei, you can find it in every supper market.
Wonton Soup by Qiao Xin Mian Dian: Cantonese-style shrimp wonton is something you must try.  The soup is made from boiling shrimp shells, pork bones and dried flounder to give it a distinct taste.   The best Wonton is made by QiaoXinMianDian, located at 125 Zhengdong Road. Guo Zheng Zong made by this shop is also well known by locals.
Attractions & Activities:
Meals: Hotel Buffet Breakfast, Chinese Lunch,Dinner

Day 03 Zhaoqing - Hong Kong
Detailed Itinerary:
In the early morning, you have free time for a bike ride on the water front plank of Star Lake. Then you will visit Seven Star Crag.
We will visit a number of caves, climb up one of the caves with steep stairs going up the side; at the top is a small pavilion for viewing the lake and neighboring crags.

Later today you will take train T806 (15:30/19:31) back to Hong Kong. You will arrive at Hung Hom Station in Kowloon. You will take taxi/MTR back to hotel by yourself.   Our service ends at Zhaoqing Railway Station.


Biking on Greenway of Star Lake
The greenway on water front plank of Star Lake has rewarded as one of the most beautiful biking routes in Guangdong Province.  A ride in the early morning is extremly a good begining for today.  You might take a walk around the lake if you do not prefer a bike ride.
Seven Star Crag Scenic Area
The crags are situated in or around Star Lake. The lake is partitioned into five separate sections divided with small strips of land and walkways.  First we will take a boat ride to the crags from Paifang Square. There are 531 pieces of cliff inscription of Buddhist and Taoist idols in Seven Star Crag area,  known as historical and cultural relices under state protection.
Attractions & Activities:
Meals: Hotel Buffet Breakfast,Chinese Lunch

* Tour departs in every Wednesday and Saturday.
* The group requires a minimum of 4 people.  Based on twin share.

* After you have paid, If less than 4 people sign in eventually, please pay extra charge USD100 per person,  or you can ask for 100% refund 14 days prior of tour start day.

Passport and China visa
* Please bring along passport and return air ticket for immigration.
* We will issue FREE China stay 144 hours group visa for all clients who have book this tour.
* For guest who has individual China visa, please inform us in advance.
* China immigration authority will first utilize the individual visa even you are on our 144 hour group visa list.