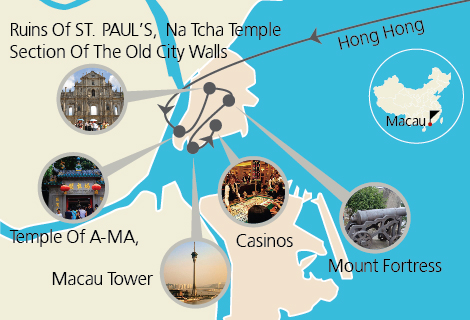 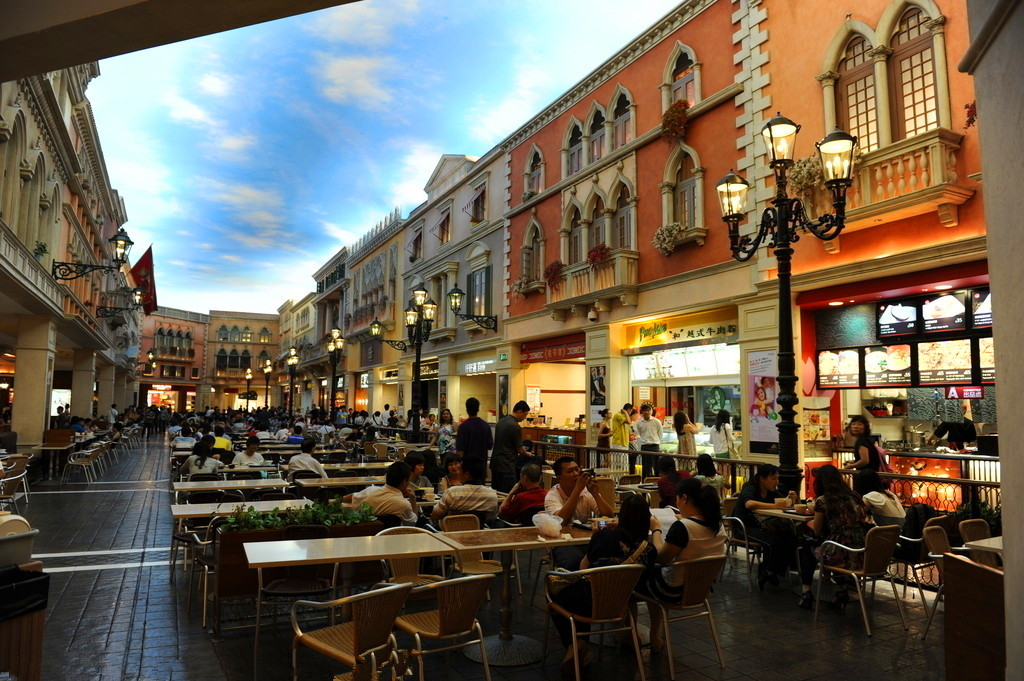 Duration: 10 hours
Time: 8:00AM - 6:00PM
Discover Portuguese influences in Macau on visit to various historical and cultural sites like Museum of Macau, Macau Tower, Section of the Old City Walls and...

HOTEL PICKUP
Please select your hotel, BOOK NOW, see pickup time on the next page.  If you can not find your hotel, select "Z - my hotel is not in the list", tell us your hotel name and receive your pickup time by email.

Book Now
Day 01 Macau Day Tour from Hong Kong
Detailed Itinerary:
Hotel pickup time is between 07:00 to 07:30 from your hotel lobby.  Transfer to ferry terminal.  Take 1-hour ferry by turbojet to Macau, an overseas territory by Portuguese until 1999, an unique place that reflects a mix of Portuguese and Chinese influences.  Escorted tour to visit the Macau UNESCO Heritage Sites on Macau Island from 10:00 to 15:00.  Lunch is not included in this package, you will have flexible choices from Portugal’s Michelin-starred Guincho a Galera Restaurant, known for its “Favourite Portuguese dishes in Macau that you will not find in Portugal”, to local street food vendors selling Portuguese egg tart, Mashed potatoes, Egg Rolls, Serradura, Prawn tartar, seafood rice, and more.
- Visiting Places -
Ruins of St. Paul's Roman Catholic Church (World Heritage)
- The first church and Colleague of the Jesuits in China
Mount Fortress (World Heritage)
- Macau's principal military defense structure which was built in conjunction with the Jesuits form 1617 to 1626
Museum of Macau
- Exhibits that illustrate the life of Macau and its people over the past four centuries
Na Tcha Temple (World Heritage)
- This Chinese traditional styled temple known as Na Tcha Temple was built for worshipping Na Tcha (a mythical character)
St. Dominic's Church (World Heritage)
- Delicate wooden ceiling and sacred art
Holy House of Mary
- The 1st western-style clinic in Macau
Senado Square
- An elongated triangular shaped square and connects Largo do São Domingos at one end and Avenida de Almeida Ribeiro on the other. Vast majority of the buildings around the square are European styled, The most famous ones are Leal Senado Building (World Heritage), General Post Office Building, etc.
Sands Casino
- Macau offer a large variety of casino games that give versatile entertainment to visitors. Sands Casino was the first Las Vegas style casino in Macau. Age below 21 or wearing shorts or slippers is denied to Casino. No photo-shooting allowed inside Museum and Casino.
At 4:30pm, you'll be transferred to Macau Outer Harbour Ferry Terminal.
Return ferry at 1700
Coach transfer to your hotel will be arranged to hotels either on Hong Kong Island or in Kowloon area.
Attractions & Activities:
Meals: No meal

The Museum of Macau is closed on Monday
Macau Entry:
Bring along passport and return air ticket for immigration entry at Macau
Please inform your nationality on reservation
The immigration department of Hong Kong has announced that starting from 23 January 2017, Indian national must apply for and successfully complete pre-arrival registration online before they can visit Hong Kong visa-free. From 23 January for any Indian passport holder join the any outgoing tour to Macau must bring their passport and with copy of pre-arrival registration.
When your tour guide pick up the Indian guest for outgoing tour to Macau, they will check with the guest to ensure they have the copy of pre-arrival registration.
Chinese passport holder needs Macau Travel Permit which should be applied from Chinese Embassy in advance.
Chinese citizen from mainland China might have problem for re-entry of Hong Kong due to different explanation of restriction for your Hong Kong Travel Permit. Please do not book this tour. The local tour operator might have to reject your booking.
Pickup:
PIckup from 40 hotels in Hong Kong Island, and 60 hotels in Kowloon area.
Meeting point is in the lobby of your hotel or you will be advised of the nearest pickup hotel to meet your guide
If you stay in a local home or a hotel not in the pickup list, please inform of the address upon booking. You will be informed of the nearest pickup hotel and pickup time to meet your tour guide.  Your reply of approval of this pickup arrangement and deadline of apply time is critical.  Booking will be rejected If you don't approve this pickup arrangement, and refund will be arranged
If there is not a pickup hotel nearby, the local tour supplier will reject your booking
MUST be on time since the reserved round-trip ferry tickets are not changeable
There is no refund for no show or being late
Casino visit:
The visiting time in Sands Casino is 45 minute
Ages below 21 or those wearing shorts or slippers are not allowed access to casino
No photos allowed inside museum and casino
You can walk around the area and come back in time if you do not want to enter the casino.

Q:
Macau Historic Heritage Sites Tour with round trip transfers from Hong Kong
What is the difference between this tour vs. https://www.chinatouradvisors.com/chinatour/Macau-Tour-with-pickup-from-Hong-Kong-68.html
Asked by Angela on July.30, 2018 22:17
A:
USD148 package is inclusive of Buffet lunch is arranged at 360 cafe, a 360 degrees revolving restaurant on the 60th floor of Macau Tower; USD109 package is not included of Macau tower and lunch.
Answered by billybear on July.31, 2018 10:22

Q:
Macau Excursion plus Museum of Macau
I'm interested in this tour for Fri 6/24 for 4 adults. Do you have any availability? We stay at the Regal Oriental Hotel.
Asked by Lisa Chu on Jun.23, 2016 08:20
A:
Hi, Lisa, Tour is available for Fri 6/24, we can pick you up from lobby of Regal Oriental Hotel at 07:20. Please kindly complete your booking by clicking BOOK NOW on the following page, secure your booking by paying with credit card. I will send you a confirmation voucher with an urgent local telephone number for contact in case you might need. My offer is vaild only before 15:00, 23 June (Hong Kong Time). Please notice that we do not accept pay in cash on site, because we need to buy ferry tickets at 15:00 for all passengers one day prior. Thank you.
Answered by billy on Jun.23, 2016 09:19

Q:
Macau Excursion plus Museum of Macau
I came to this Web site because it promised time in the Museum of Macau instead of in a casino, but I don't see that here.
Asked by Don Warrin on Jun.18, 2016 12:30
A:
Dear Don, Thank you. We only have one tour inclusive of a visit to Museum of Macau. http://www.chinatouradvisors.com/chinatour/Macau-Excursion-plus-Museum-of-Macau-1513.html If you like this tour, please comple your reservation by clicking BOOK NOW.
Answered by ALEX on Jun.20, 2016 11:13

Q:
Macau Excursion plus Museum of Macau
Hiw much is the cuty tour package ? We are already here in macau. Hoping for ur immediate response. Thanks Gladies
Asked by Gladies dela cruz on Jun.14, 2016 06:05
A:
Dear Gladies, Thank you. The price is USD45 per person, pikcup from your hotel lobby in Macau at 09:50am. Could you please tell me the hotel name? Please complete this booking by clicking BOOK NOW on this page, pay with credit card. We do not accept paying in cash on site. http://www.chinatouradvisors.com/chinatour/Macau-One-Day-Join-in-Group-Tour-SIC-857.html
Answered by Steven on Jun.14, 2016 09:08

Q:
Macau Excursion plus Museum of Macau
Hi i would like a tour inclusive of the venetian visit plus the museum visit...which package i shld take..
Asked by meera on Jun.02, 2016 01:50
A:
Hi, Meera, I have find a solution, tell me if you like it: 1. Click BOOK NOW, book this tour inclusive of visit to Museum of Macau. 2. We will book a 10pm ferry ticket for you. Please pay price difference of night ferry at USD5 per person at http://www.chinatouradvisors.com/chinatour/PayWay.html. 3. At 4:30pm, our tour coach will drop you off at Macau Outer Harbour Ferry Terminal. There are lots free hotel shuttle bus to Venetian Macao. http://www.chinatouradvisors.com/travel-tips/The-Venetian-Macao-Free-Shuttle-Bus-Schedule-162-98.html 4. At 9pm, you take free hotel shuttle bus from Venetian to Macau Ferry. 5. After arriving at ferry terminal in Hong Kong, you need to take a taxi back to hotel by yourself. Thank you.
Answered by billy on Jun.02, 2016 11:24