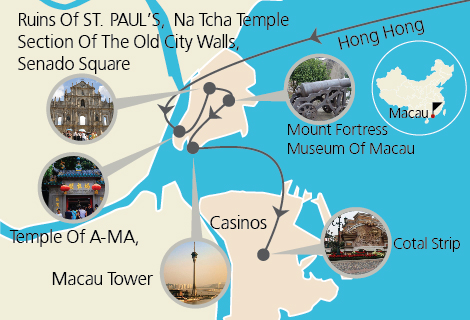 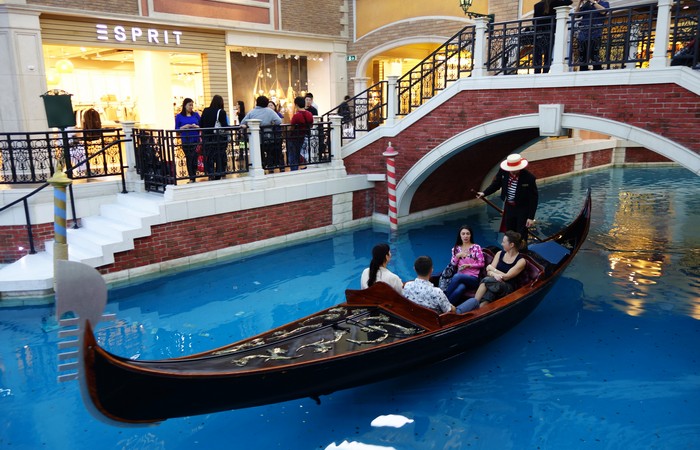 Duration: 11 hours
Time: 10:00AM - 9:00PM
Macau sightseeing and visit the Venetian. Pickup at Macau outer harbour ferry terminal at the time you prefer.
Free time in Senado Square.  Tour ends at Venetian Macau.  Transfer to Macau airport, Macau ferry or your hotel in Macau after the tour.

Please tell us the pickup place as shown below:

Book Now
Day 01 Macau Tour
Detailed Itinerary:
You will have a 7-seater with a tour guide and a driver, only work for you.  No other passengers.  Our tour guide will pickup at Macau outer harbour ferry terminal or your hotel lobby in Macau at 09:30.  Your sightseeing tour begins with several UNESCO World Heritage Sites.

RUINS OF ST. PAUL'S
In the heart of the old city stands the great carved stone facade of St. Paul's, which, with the grand staircase, are all that remain of the first church and Colleague of the Jesuits in China.  Designed by an Italian Jesuit, the church was built in the early 17th century.  In 1835 a fire destroyed all but the facade.
NA TCHA TEMPLE (World Heritage)
This Chinese traditional style temple called Na Tcha Temple which was built for worshipping Na Tcha (a mythical character). This temple has become a World Heritage in 2005.
MOUNT FORTRESS (World Heritage)
The fortress was Macau's principal military defense structure which was built in conjunction with the Jesuits form 1617 to 1626. The fortress covers an area of 10,000 square metres and in the shape of a trapezoid. It has become a World Heritage Site in 2005.


MUSEUM OF MACAU
The Mount Fortress today houses the Museum of Macau, which occupies the foundations and platform with exhibits that illustrate the life of Macau and its people over the past four centuries, emphasizing the bicultural character of the city with its different faiths and festivals, social customs, architecture, sports, art and cuisine.  Special attention is also given to the merging of cultures to create the distinctive Macanese Society.
(N.B. Museum of Macau is closed on Monday. It will be replaced by visiting Maritime Museum on Monday tours.)

SENADO SQUARE
Senado Square is quite near RUINS OF ST. PAUL'S, and many people like to stay there for hours for shopping or just strolling around.  It is an elongated triangular shaped square and connects Largo do São Domingos at one end and Avenida de Almeida Ribeiro on the other.  Vast majority of the buildings around the square are European styled and many are protected monuments. it was covered by Portuguese pavement in the early 1990s and designated a pedestrian-only zone
MACAU TOWER (Admission on own expenses)
Soar to a breathtaking 223M above ground, Macau Tower offers you a different vision of the entire city. Gaze out over to Cotai Strip, look for Macau's landmarks and historical sites all in one spot.. It offers the best view of Macau and has been awarded "Best Theme Attraction in Asia Pacific" for 2005 & 2006 by TTG Asia – Macau Tower.   For those with fear of heights, there are also souvenirs shops, Mocha clubs (machine based casino gaming) and coffee shops located at the ground floor.

Optional Macau Tower @ HKD120/adult & HKD70/child or senior (aged 65 or above).
COTAI STRIP
Inspired by the Las Vegas Strips, COTAI strip is the fastest growing entertainment district in the recent years funded by Las Vegas Sands. By the end of 2010, the strip will host up to 30 resorts making it the newest vacation paradise.

Cotai was the result of a major land reclamation project which joined the two islands of Coloane and Taipa,   It is to be mainly used for casino developments and Las Vegas Sands Corporation envisioned that their development of several adjacent properties would comprise an area that would resemble the Las Vegas Strip.


After visiting Tower of Macau, our coach and tour guide will escort you to the Venetian Macao resort, the largest single structure hotel building in Asia. You will have the choice to either trying your luck at the gambling table, shop till you drop at the Grand Canel Shoppes or treat yourself to taste a variety of international cuisine within the resort.


Street of Rua do Cunhua
It is about 30 minute walking distance of Venetian Macao.  Rua do Cunhua is named after the famous Portuguese explorer Tristão da Cunha. Today Rua do Cunha is essentially the symbol of Macau and attracts tourists far and wide due to its traditional colonial architecture. Apart from the history and culture that surrounds this narrow pedestrian street there is a range of traditional Macanese pastries and snacks that are lined along the street. There is also the famous restaurant "O Santos" Comida Portuguesa which is known as Macau’s most authentic Portuguese restaurant.

Later in the afternoon, you will be transferred to Macau airport, Macau Outer Harbour Ferry or your hotel in Macau after the tour.

1) Check the price
After select a date, you will see rate for different size of group from 1 adult to 15 adults.
The rate shown above is for group size of 4 adults.

Q:
Macau Private Excursion with Macau Airport Transfer
do you include price for ferry from Kowloon to Macau as well as pick-up at the ferry terminal in Macau? we would require to return to Kowloon to stay overnight as booked. would you offer this option or only trip to the airport which does not suit us? we would need return ferry to Kowloon and also transport to the ferry terminal.
Asked by Darlene on July.12, 2016 20:51
A:
Dear Darlene, Thank you. We have 3 different Macau tours every day as shown in the "Remarks" on this page, pickup from your hotel in Kowloon, and transfer you back to your hotel in Kowloon. Please select which one you prefer. The tour code is 555A, 501MAE, and 555V.
Answered by Yuki on July.13, 2016 09:44