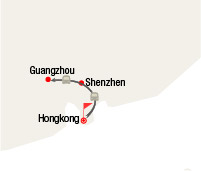 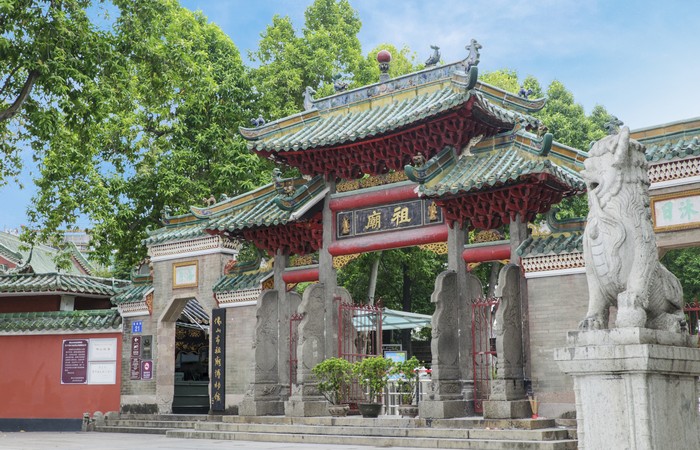 This tour is available every Tuesday, Thursday and Saturday.


HOTEL PICKUP
Please select your hotel, BOOK NOW, see pickup time on the next page.  If you can not find your hotel, select "Z - my hotel is not in the list", tell us your hotel name and receive your pickup time by email.
> Book Now

Book Now
Day 01 Hong Kong to Foshan
Detailed Itinerary:
Your Hong Kong tour guide will pick you up from your hotel in Hong Kong.


HOTEL PICKUP Please click the link of the hotel pick up list here.
- Hotel pick up and coach transfer to Hung Hom railway station by a coach with English speaking tour guide.
-First class train ticket Hong Kong to Shenzhen.
- our Hong Kong tour guide will take train with you from Hung Hom to Lo Wu.
- our Hong Kong tour guide will leave only after you have met our Shenzhen tour guide.
Another Shenzhen tour guide will meet you at Lo Wu Pass and starts to show you around Shenzhen.
We will visit Guanlan Painters Village, enjoy Dim Sum Lunch at Shangri-la Hotel (plan A) or Indian lunch at a local authentic Indian restaurant (plan B).  Please tell us which meal you prefer on reservation.
Later in the afternoon, transfer to Shenzhen Railway Station to take train to Foshan.

Your Shenzhen tour guide will travel to Foshan with you, stay in the same hotel with you and escort the tour for the next 2 days.
Upon arrival you will check in to your hotel in Foshan. You will have free time for the rest of the day. We recommend you to visit Donghuali Ancient Street at night.
HIGHLIGHTS

Painters Village in Guanlan
202 sets of ancient and elegant traditional Hakka Houses, built in late Qing Dynasty, all surrounded by lotus pond, moon pool, bamboo, farmland, and hills. In 2006, the local government turned this place into a Print Make Base. It was divided into two parts: Local Chinese Painter's Lab, and International Aritists Village. Hundreds of artists from home and abroad stay in this Painters' Mecca.

Lavender Garden
There are not only lavender, but also lots of namelist flowers in garden. In summer, eyeful of sunflowers, with the view of ancient Hakka watch tower in the back ground, a image of art work by Vincent Van Gogh.

International Artists Village
Lotus pond and bamboo surround the village, lush and eyeful of green. So far, more than 200 artists from 40 different countries have been stayed here.

Studio and Workshop in village
All these old houses are stand side by side, elegant and dignified. Bule brick, gray tiles and variedgated wall, like a time machine takes us back to ancient time.  Time will appear to stand still as you explore the narrow streets and of this historic stilted village.  Many old houses have used by local artists as Studios and workshops.

MEAL ARRANGEMENT
You can choose option1 or option 2 for lunch: Option 1: Dim Sum Lunch at Shangri-la Hotel After visiting the Museum of History and Folk Center, we have specially arranged a traditional dim-sum lunch for your stomach at the world famous Shangri-la hotel. (Shang Palace). Option 2: Indian Lunch at a Local Authentic Indian Restaurant You will have the option of enjoying a traditional Indian lunch at the Indian Restaurant which located in Shenzhen. The Indian food will give u a unique and unforgettable experience. (Indian vegetarian menu is also available; please advise us when the booking is made. Late request will not be entertained)

-- Foshan--
Donghuali Ancient Street
A cluster of ancient residential buildings dating from Qing Dynasty (1644-1911) and Republic of China (1912-1949).  Lots of traditional style narrow lanes, teahouses and houses are hidden in the street.  This is the most complete existing typical Lingnan style of residential architecture building group during that period in Foshan.

Day 02 Foshan to Hong Kong
Detailed Itinerary: In the morning, you will visit the ancient Foshan Ancestral Temple, Wong Fei-Hung Museum and Nanfeng Kiln an old pottery factory that started her operation 600 years ago.  It is the only kiln that makes pottery in traditional way in China!  There is art class that teaches children making potteries here.  You can pay extra for a 30 minute art class.

Later today you will take train T806 (16:35/19:31) back to Hong Kong.  You will arrive at Hung Hom station in Kowloon.  You will take taxi/MTR back to your hotel by yourself.


Foshan Ancestral Temple: An ancient temple that dedicated to Confucianism, Taoist and god of Beidi. It was first built in the Song dynasty during the reign of Emperor Zhezong, in the Yuanfeng Era (1078-1085), but was ruined towards the end of the Yuan Dynasty. It was rebuilt in the 5th year of Hongwu Era of the Ming Dynasty (1372).
Wong Fei-hung Museum: Wong Fei-hung (9 July 1847 — 25 March 1924) was a Chinese martial artist, practised and taught acupuncture and other forms of traditional Chinese medicine in Po-chi-lam, his private clinic in Foshan. He is considered a folk hero and the subject of numerous films and television series.   Collections of orginal photos, films are displayed here.  A traditional Lion Dance Show is presented 3 times a day.
Ancient Nanfeng Kiln: Ancient Nanfeng Kilin is an attraction in Ancient Nanfeng Kiln Cultural and Creative Zone, located in Shiwan Town, Chancheng District, Foshan city of Guangdong province. It was built in Ming Dynasty Zhengde years (1506-1521) and is still in use now.
Foshan Pottery Museum
The best Pottery Museum in South China.  learn the development of ceramic industry in Chinese history.
Kowloon-Canton Intercity Through Train: An inter-city railway service between Hong Kong and Guangzhou, Foshan, Zhaoqing.  Jointly operated by the MTR Corporation of Hong Kong and the Ministry of Railways of the People's Republic of China. Services operate along the East Rail Line within Hong Kong territory, crossing the Hong Kong-Chinese border at Lo Wu, and continuing along the Guangshen Railway in Guangdong province.
Twelve trains run between Hong Kong and Guangzhou every day, with a journey time of 1 hour 40 minutes.
One train runs between Foshan, Zhaoing and Hong Kong every day. The Kowloon-Canton Intercity Through Train started service from 5 October 1911.
At Foshan Railway Station, you will pass the immigration before bording the train.  It means you will leave China and head for Hong Kong.  Is it an amazing journey?  You have witnessed this historical railway system,  colorful local culture in Foshan.  You also experience the policy of  "one country, two systems" . which means a lot for inner land of China and Hong Kong.
Your tour guide will escort you to Foshan Railway Station and that is when our services end.
Attractions & Activities:Ancient Nanfeng Kiln
Meals: Hotel Buffet Breakfast

2) Discount
A minimum of 2 Adult(s) per booking is required.
For 2 seniors or 1 adult and 1 senior, please select as 2 adults.