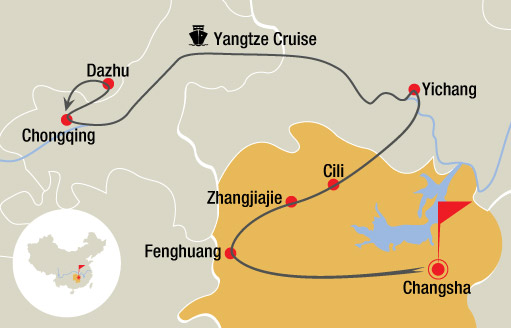 Phoenix Town: Also known as Fenghuang is located in Xiangxi Prefecture, Hunan Province, People's Republic of China. It has an exceptionally well-preserved ancient town that harbors unique ethnic languages, customs, arts and a lot of distinctive architectural remains of Ming and Qing styles.

Tuojiang River: It is the largest river in the county, one of the branches of Wushui River. Originating from Nanshan Gorge of Dusha, Kuhe, it flows from west to east in Fenghuang county


Stilts Houses: A boat trip ride on Tujiang river is included. The highlight of the cruise is the stilts houses. They are interconnected structures on water that form a tightly-knit town for villagers to live in.  Some of the stilts houses have turned into shophouses designed for both residential and commercial uses,  The ground floor portions are mostly by small businesses like pawnshops and food vendors. The upper floors were residential use.
Attractions & Activities:Ancient Phoenix Town, Tuojiang River
Meals: Hotel Buffet Breakfast & Chinese Lunch

Day 03 Full Day Zhangjiajie National Forest Park
Detailed Itinerary:
Zhangjiajie National Park is divided into 3 portions: Yuanjiajie, Yangjiajie and Tianzishan.  Till now the cable to Tianzishan is till under construction.  So we will visit Yuanjiajie and Yangjiajie.  Take Bailong lift up to Yuanjiajie.  Walk around the mountain top for 1 hour to see the No. 1 Bridge.  Then take 30 minute coach to Yangjiajie.  Hike another 1 hour to Wulong Village and Tianbofu.   Take cable car down the mountain and finish today's tour.

Zhangjiajie (Bailong Elevator):  A glass elevator built onto the side of a huge cliff.  It is 1,070 feet (330 m) high. It is claimed to carry 3 world records:  the world fastest passenger elevator, the world highest outdoor sightseeing elevator and the world maximum load elevator.

First Bridge: a 5 meter stone slab naturally wedged between two peaks. The back garden here is known as the "Natural Bonsai" and resembles the royal garden with varieties of pinnacles.

Yuanjiajie Scenic Area: Yuanjiajie is famous as the Southern Sky Pillar inspired the floating mountains in the Hollywood blockbuster Avatar.

- IMPORTANT NOTICE-
Due to the renovation of cableway in Tianzi Mountain, the following areas can not be reached till Oct 2015.

Ten-mile Gallery: Located in the Donggou Gorge, Ten-mile Gallery is a 5km scenic road with Wanxing village and Longtan village on each end. With all kinds of sceneries and attractions on it, the road offers an amazing experience of beauty.  We will take mini train ride through this picturesque area.

Day 04 Zhangjiajie (By coach)
Detailed Itinerary:
Today you will take a cruise on Baofeng Lake. Followed by a stroll along the Golden Whip Stream. Afterwards, you will visit the unique art of sand painting at Junsheng Art Gallery.


Baofeng Lake: The lake and surrounding area comprises some 275 hectares, and consists of Baofeng Lake and Yingwo Stockade Village.  The lake is within the mountainous area with greenery surroundings where you will see mirrored surrounding scenes on the lake, showing a wonderful vertically symmetrical landscape painting.
Golden Whip Stream: The major scenic spots of the stream include Golden Whip Rock, Purple Grass Pond, Rock of Welcoming Guests and Reunion Rock. The stream is one of the most beautiful in the world. On the way, girls from Tujia will present visitors traditional folk songs when requested. The main scenic spots here include: the Welcoming Guests Rock, Golden Whip Rock, Reunion Rock and the Purple Grass Pond.
Junsheng Sandstone Painting Gallery: Junsheng Sandstone Painting is regarded as “the special pride of Hunan”. It is highly rated and prized by art collectors. In fact, it is considered the precious gift that the Hunan Provincial Government present to all guests at home and abroad.
Attractions & Activities:Baofeng Lake, Golden Whip Stream, Junsheng Art Gallery ,Zhangjiajie Junsheng Painting Institute
Meals: Hotel Buffet Breakfast & Chinese Lunch

Day 05 Zhangjiajie to Yichang
Detailed Itinerary:
Today you will visit Tianmen Mountain by cable car.  1 hour hike through the Skywalk Path.  Climb up the Tianmen Arch.  Later today you will take 5 hours train to Yichang.   Train  K1886 (16：20-21：12).
Pickup from Yichang East Railway station and transfer to the wharf for Yangtze cruise.
Tianmen Mountain: Round trip cable car transfer to the summit of the mountain.  Tianmen Mountain Cableway is claimed in tourist publications as the "longest passenger cableway of high mountains in the world", with 98 cars and a total length of 7,455 metres (24,459 ft) and ascent of 1,279 metres (4,196 ft) The highest gradient is an unusual 37 degrees.
Tianmen Arch: An 11 kilometres (6.8 mi) road with 99 bends also reaches the top of the mountain and takes visitors to Tianmen cave, a natural hole in the mountain of a height of 131.5 metres (431 ft).
Skywalk Path: Skywalk is built on the side of a cliff on Tianmen Mountain in Zhangjiajie. Skywalk is about 4,700 feet above sea level and 200 and 60 metres long.  You can walk on kilometres of paths built onto the cliff face at the top of the mountain, including sections with glass floors.

You will take a 5 star ship of Victoira Cruiselines, Century Cruiselines or President Cruiselines.
Yichang to Chongqing

The Ship Locks make the shipping through the Three Gorges more safe. Each of the two ship locks is made up of five stages, taking around four hours in total to transit, and has a vessel capacity of 10,000 tons.

Day 07 Yangtze Cruise
Detailed Itinerary: After breakfast, you willl change to small boat. You will take a shore excursion to Lesser Three Gorges or Shennong Stream. Today the cruise will pass through Qutang Gorge and Wu Gorge.

Lesser Three Gorges is located on the north bank of the new Badong county. Here everything is green with flourishing trees and shadows reflecting on clear waters. The shore excursion is included in the cruise ticket.

Day 08 Yangtze Cruise
Detailed Itinerary: This morning, the ship will arrive at Zhong County, you will take a shore excursion to Shibaozhai, a village surrounded by stockade formed from upright wooden posts and stakes, an ancient defense system against enemy attack. It is the largest wooden structure architecture in China.

Tonight you will enjoy the Captain's Farewell Dinner.

Shibaozhai: Shibaozhai is located in Chongqing’s Zhong County and is one of the most famous tourist attractions of the Yangtze River. The temple dates back to the Qing Dynasty and exhibits some of the most spectacular architecture. The 12 story Pagoda is enlisted as one of the 8 Architectural Miracles of the World.

Fengdu Ghost City has been well known as the "Ghost City" since 220AD. An interesting program to see the artisanship of the ancient craftsmen, the unique styles of architecture and the uniqueness of the ghost culture in China.

Day 10 Depart from Chongqing
Detailed Itinerary: After having breakfast at the hotel, you will be transferred from your hotel to the airport for your departure.
Attractions & Activities:Chongqing Jiangbei International Airport
Meals: Hotel Buffet Breakfast

The cruiselines company works will assign rooms 3 days prior of cruise depart day.  If you prefer a higher-floor room on the ship, we will inform you additional cost accordingly.

The price of this package is based on standard cabin.  We will tell you additional cost if you upgrade to suite.

Shore Excursion
* Shore excursions are offered by cruise lines.  It might be slightly different than what you see from our website.

Cancellation Policy
100% penalty if you cancel your a confrimed booking.