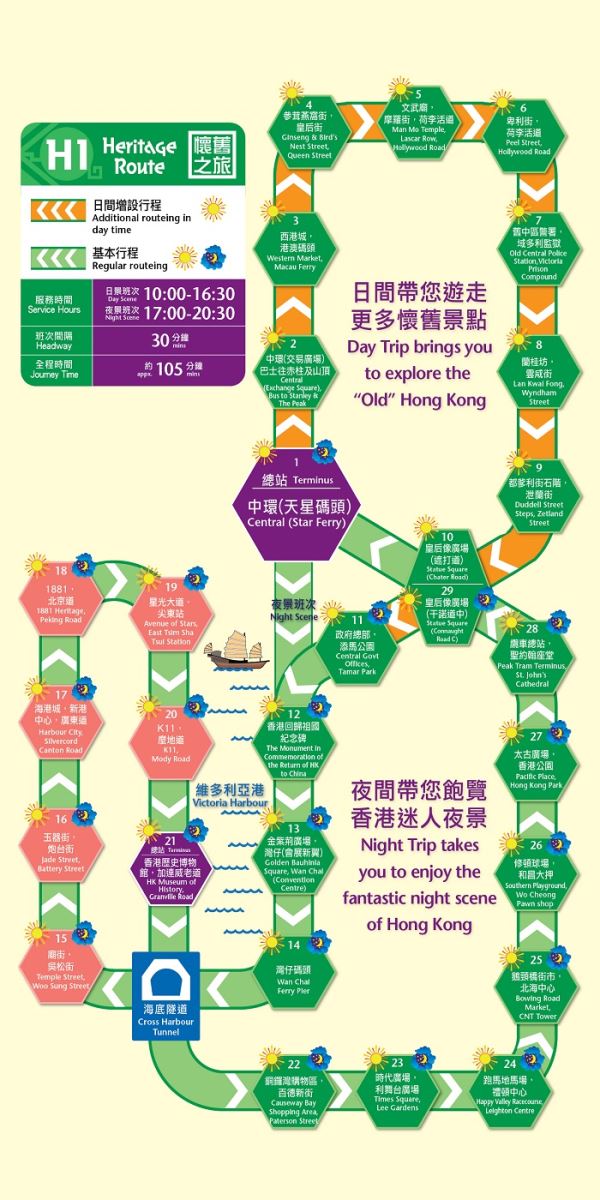 Sightseeing on the bus route

1881 Heritage
1881 Heritage was the former Marine Police Headquarters constructed in 1884, comprises a main building, a stable block and signal tower (commonly known as Round House). The compound has been occupied by the Marine Police since its establishment until 1996, except for the Japanese Occupation (1941-1945) when it was used as a base by the Japanese navy. The main building was originally a two-storey structure to which was added an extra storey in the 1920s. The south-east and south-west wings of the main building served as married quarters. During the Japanese Occupation Period, extensive underground tunnels were constructed beneath the lawn but after World War II, in view of public safety, these tunnels were blocked and the lawn was re-turfed. The Signal Tower is the most unique building within the compound and was constructed to provide time signals to ships in the harbour. Its use diminished in 1907 when the time ball apparatus was removed to Signal Hill. Being one of the oldest surviving government buildings in Hong Kong, the former Marine Police Headquarters Compound was declared a monument in 1994.

Antiquities and Monuments Office
This is the oldest surviving school building constructed for foreign residents living in Hong Kong. In 1900, Mr. Ho Tung (later Sir Robert) donated $15,000 to the Government to erect a school in Kowloon. The building was officially opened on 19 April 1902. It is a typical Victorian structure, but was modified to adapt to local climatic conditions by adding wide verandas, high ceilings and pitched roofs. After proper restoration, it houses the Antiquities and Monuments Office.

Duddell Street Steps and Gas Lamps
The stone steps at Duddell Street, Central were built between 1875 and 1889. Four gas lamps surmounting the balustrades at the top and foot of the steps are the only surviving working gas street lamps in Hong Kong. The Hong Kong and China Gas Company which was originally founded to provide street lighting in Hong Kong continues to operate the lamps as objects of historical interest.

Former Central Magistracy
The construction of the Central Magistracy commenced in 1913 and was completed in 1914. The site was originally occupied by the first Hong Kong Magistracy which was probably erected in 1847 but was later demolished to make way for the present building. The provision of an extensive basement in the new magistracy caused much difficulty and delay in the construction work. The building has a majestic appearance with imposing pillars of the facade and other features in the Greek-revival style. The massive retaining walls were constructed with granite blocks. The Central Magistracy was closed in 1979 and had been used by different associations affiliated to the Police.

Government House
Government House was formerly the office and residence of previous Governors of Hong Kong. Construction works started in 1851 and took four years to complete. At that time it enjoyed a fine harbour view. It was originally built in the Georgian style and bore rich colonial characteristics. It underwent a number of large-scale renovations, with the latest undertaken in 1942, during the Japanese Occupation, by a Japanese engineer, Siechi Fujimura, who designed to construct a dominant central tower to link the two original buildings; the roofs were also modified to add in more Japanese flavour, thus diminishing the strong European style of the mansion. It was then used as the military headquarters for the Japanese until 1945. Government House is now the residence and office for the Chief Executive.

Hong Kong Court of Final Appeal
The former French Mission Building on Battery Path, Central, was built in 1917 on the foundation of a previous structure. A chapel is incorporated in the north-west corner with its cupola projecting above the roof. The three-storey building is constructed in granite and red bricks in neo-classical style. It was occupied successively by the Education Department, the Victoria District Court, the Supreme Court, and the Information Services Department. It is now used as the Hong Kong Court of Final Appeal.

Hong Kong Observatory
The Hong Kong Observatory was established in 1883 and was built on a small hill in Tsim Sha Tsui Kowloon. Built in the colonial style, it is a rectangular two-storey plastered brick structure characterised by arched windows and long verandas. The technical and operational units of the Observatory have been moved to new premises nearby, leaving the old building to continue to house the office of the directorate and to serve as a centre of administration.

Man Mo Temple
Built in 1847, it was dedicated to Man Cheong (the God of Literature) and Kwan Yu (the God of War).

Museum of Tea Ware
Flagstaff House in Hong Kong Park Central is the oldest existing Western building in Hong Kong. Built in 1846 for Major General George Charles D'Aguilar, it was formerly known as Headquarters House. The building was renamed Flagstaff House around 1932 and remained the office and residence of the Commander of British Forces until 1978. It now houses the Museum of Tea Ware displaying Chinese teaware and related material of different periods.

Old Central Police Station
The oldest structure within the compound is a barrack block built in 1864. It is a three-storey building constructed adjacent to Victoria Prison. A storey was later added to the block in 1905. In 1919, Headquarters Block facing Hollywood Road was constructed. Subsequently in 1925, the two-storey Stable Block was constructed at the north-west end of the parade ground and later used as an armoury.The Police Station together with the former Central Magistracy and Victoria Prison form a group of historical architecture representing law and order in Hong Kong.

Old Supreme Court
The Old Supreme Court which has housed the Legislative Council Chambers between 1985 and 2011, was built on reclaimed land using hundreds of Chinese fir-tree piles as foundations. The building was opened on 15 January 1912 by the Governor, Sir Frederick Lugard. The two-storey granite building is neo-classical in style supported by tall Ionic columns. The most outstanding feature of the building is the pediment in the centre portion which is surmounted by a blind-folded statue of Justice, represented by the Greek goddess Themis.

St. John's Cathedral
St. John's Cathedral is the oldest surviving Western ecclesiastical building in Hong Kong. The foundation stone was laid by the Governor, Sir John Davis on 11 March 1847 and the construction was completed in 1849. The Cathedral underwent extension in 1873. During the Japanese Occupation (1941-1945), it was converted into a club house for the Japanese and thus suffered damage.