Qinghai (Chinese: 青海; pinyin: Qīnghǎi; Wade–Giles: Ch'ing-Hai, formerly known in English as Kokonor, is a province of the People's Republic of China located in the northwest of the country. As one of the largest province-level administrative division of China by area, the province is ranked fourth-largest in size, but has the third-smallest population. Located mostly on the Tibetan Plateau, the province is home to a number of ethnic groups including the Han Chinese, Tibetans, Hui, Tu, Mongols, and Salars. Qinghai borders Gansu on the northeast, the Xinjiang on the northwest, Sichuan on the southeast, and the Tibet Autonomous Region on the southwest. Qinghai province was established in 1928 under the Republic of China period during which it was ruled by Chinese Muslim warlords known as the Ma clique.

Best Time to Visit: May to October 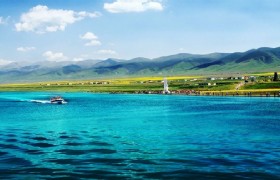 Qinghai Lake is the largest salt water lake in China with an area of 4...

Find maps of Qinghai, including Qinghai's regional location to other parts of China as well as . Our Qinghai travel guide ( includes weather, living, food, weather, transportation, etc.) has heaps of useful information and tips! > See More

Located in the northwest of China's Qinghai plateau, although Qinghai is not very prosperous commercial area, it has abundant natural properties.Shopping in Qinghai,visto should pay special attention to the unique characteristics of the Qinghai crafts and natural properties. Theren aren't many prosperous commercial area in Qinghai,so visto can buy the great tourism products ...> See More

Lamb Kebabs Lamb Kebabs is a famous Qinghai local delicacy.Qinghai has great lamb.For the Lamb Kebabs are cheap, delicious and easy to make,it's popular in all ethnic groups og Qinghai. Lamb Kebabs are made of fresh lamb.Fitly, cut the meat into slice and skewer them to the iron sticks. Secondly, sprinkle the condiment such as soy sauces, refined salts, ginger powde, cayen...> See More